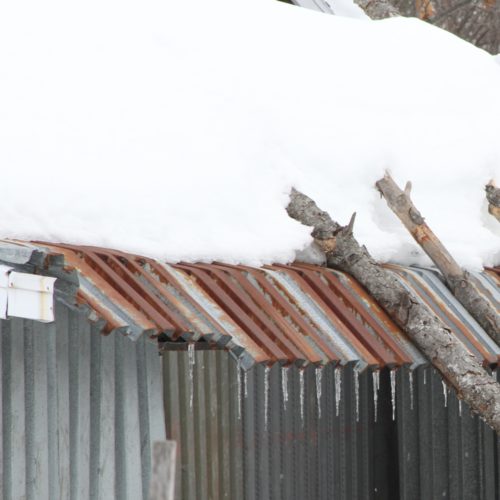 Even though he had a cell phone, they didn’t speak every day. There was no cellular reception at home and the long distance charges were best saved than spent: wasn’t that the point? He’d been gone two years, working on somebody’s larger farm in that country to the north, a place that got so cold in winter she had trouble making sense of what he described, the bitter winds, the long cold dark months, the deep snow. She shivered just imagining it. She was harvesting their crops in the heat while he tended animals wearing a down-filled parka, a wool hat and gloves, and big boots.

He’d signed a five-year contract to work abroad. He could back out anytime, but that would mean giving up a bonus they counted on, which increased at the end of each year. She missed him, of course, and so did the children. She had to care for the four of them as well as the entire homestead on her own, though it was getting easier now that the eldest were 10 and 8.

That year she’d chosen her commercial crops carefully, using both instinct and research – combined with her canny flair for new trends. She delivered her mushrooms to fancy restaurants in the capital and chatted with chefs, asking about the next big thing. She made a list, found and grew as much as she could of everything on their little plot, with its soil she’d been working on improving and its shade he’d been reshaping on purpose.

The growing season was exceptionally bountiful. The weather over the entire country that spring and summer was fabulous – it rained enough for most cultures, but mostly during the night, leaving most days for plants to grow and thrive from the damp soil toward the warm sun. Pest insects were barely an issue that year. All over the country, tourism was picking up thanks to several large-scale projects now coming to fruition and to the rare prolonged beautiful weather. Restaurants, resorts and hotels were suddenly full and had no vacancy in the foreseeable future.

Meanwhile he was living through his second winter under more than a metre of snow. Because she knew how hard it was for him, over there earning more than he ever could in his own country, to be cold outside and far from the ocean, to be stuck indoors under electric lights, with night time starting mid-afternoon, she didn’t like to call him every day, didn’t get joy out of telling him how gorgeous this season had finally been, after years of disaster following disaster, from political instability to locusts to drought to hail.

Then she sold not just part of some of her crops, but all of every commercial crop she’d chosen to grow, from mushrooms to squash to allegedly “super” berries, at an un-hoped for price, to a wholesale buyer who supplied the big city’s fanciest restaurants. They wanted an agreement over a few years, paid for insurance over her future harvests and wanted to build her a refrigerated storage building. They would buy all of her crops – and more if there were. She signed.

At harvest time it became clear she’d done well. Her crops had thrived and her choices met their niche markets. Payments started coming in, but she was so used to being careful, to having just enough to pay off some of their debts and expenses, that she didn’t realize right away how much was accumulating in their account. When she did, she thought the bank had made a mistake. But she sat and counted and recounted it all. With what was still to come that year, she realized, he could come home. They could suddenly afford it! Never mind the bonus: with him home, they could rent more land, prepare it ahead of the next growing season and they’d have paid everything off in a few months. In a year they’d have enough to ensure their future and the children’s future studies. For once, luck was on their side. He’d be home where he belonged!

He didn’t answer his cell phone and she figured she’d call back later. She had to pack the children’s clothes for a visit to her parents’ farm. They’d be on their way soon. He hadn’t called back by the next morning so she tried to reach him again, but he didn’t pick up. A truck had arrived to pick up produce and she had to go.

Late in the afternoon she got the call. It was an interpreter from the country where he worked. A farm building had collapsed on him. It was the weight of the snow on the roof. They were sorry. But it had been a work accident and, they said, as his widow she was entitled to compensation. They told her the amount. It was larger than she’d ever seen or had. They said the cheque was on its way by courier.

She hung up and drove the old pickup truck to the region’s highest point, a forested park from which she could see the ocean and the setting sun. She sat, hugging her knees. She’d have to tell the kids. And go on. She’d have no debt now. She’d own her land and home and have enough saved up for years.

But he was gone and every plan would forever be altered, his presence carved out of it. As the sun touched the ocean she could still feel its heat on her skin yet she got goose bumps at the thought of him choked, crushed under that ton of snow, ice and debris, perhaps wounded and cold before he died as they searched in vain. It was only when the sun had sunk completely into the ocean that she felt the tears finally start.