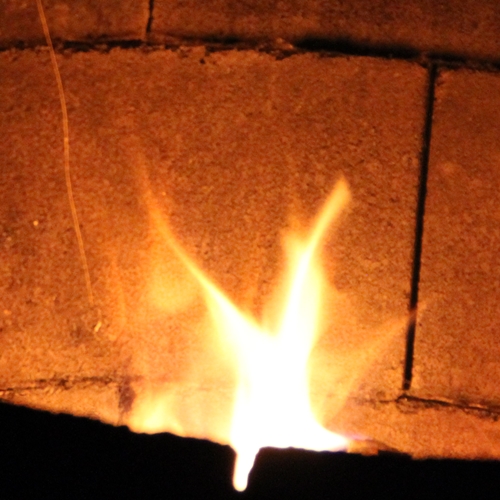 I can’t believe it. My mom is dead and the only thing I get is her fucking porcelain cat. I mean, her whole trailer burnt with her inside and so that can’t be sold and she owed back rent for her plot, so there’s no money to her name, and her old banged-up car goes to my brother, alright, but of all the things… that’s what I get? That creepy porcelain cat that was – oh how ironic – all my mom got from my grandma. That’s the only thing those stories have in common, but still.

We discussed it at school over lunch the other day and everyone agreed – you don’t die of being burnt. I mean you don’t wake up in the middle of the night to find your skin is boiling and peeling in the flames that surround you and realize you’re fucked; if your trailer catches fire with you asleep in it and you don’t wake up, the smoke will get you first. And lack of oxygen. And you just don’t wake up. So by the time you burn you’re already dead. I’m pretty sure that’s how it must have happened. Mom usually didn’t so much go to bed as pass out wherever she was. Once I’d found her snoring sitting on the toilet with her head on the sink. Another time when I went to wait for the bus I couldn’t open the door: Mom had fallen asleep outside, sitting with her back to it.

Dad doesn’t find those stories funny and he says there’s many more I’ve forgotten. He says he’s very sad I lost my mother but I think for him it’s both sad and a relief. Maybe he doesn’t admit that to himself. But it sure seems to me it makes his life simpler. No more going to get me at mom’s, no more late-night phone calls when she gets home and wants to talk to me even if I’ve got school the next day. That’s why she first got me a cell phone: Dad was getting angry at her for calling, and he refused to let me have my own phone, so she said she’d solve everything and it’d be our little secret. I already miss her crazy calls. And what I hate is that now whenever I think of mom, I think of that porcelain cat.

The neighbour got it after the ambulance and fire trucks and police cars left, she said. We went to see what was left of the fire. I forced dad to take me. There was no smoke left but you could still feel some heat coming off the black sooty mess. I thought I could smell grilled meat. That would be my mother’s body. That neighbour came out when she saw us, to give me the cat. Dad’s face was doubtful, and she said the cat wasn’t in the fire: she found it on the outdoor table, as if set there on purpose, facing the burning house. She recognized it: she and mom had often shared their lonely evenings. So she took it to keep it safe, she said.

The first week after mom died was insane. Everyone wanted me to tell them how I was feeling every minute of the day. The school counselors, the funeral home shrink, my dad, his sisters, teachers. Another kid told me the same happened to him when his mom killed herself and he just told everyone to fuck off. Now things have gone back to normal. That means no one pays much attention to me, and dad’s back to being busy with work, so I’m pretty much left alone at home. I stick to my room, mostly. It’s just me and that cat.

It’s a cheap kind of thing. Painted beige all over, with faded patches of reddish brown and chipped black, and a cracked layer of varnish all over. It has dark whiskers and round green eyes that follow you around the room. Accusingly, I find. When I was very little, mom and dad, me and my brother lived at grandma’s for a while. I was too little to remember much from that time, but I remember that whenever I’d do something wrong, like spill milk or go over the paper to the table with a crayon, I’d look up and see the cat looking at me, always looking. It saw everything. And I thought maybe it told grandma what it saw.

I don’t know why grandma had it or where it came from. It clashed with everything else in her house. Like I said, I don’t remember much, but I grew up looking at mom’s old pictures, which she kept in a small suitcase that smelled gross. Mothballs, I think she said. Grandma’s house had thick carpets and glass tables (with crayon marks…) and furniture that looked like it belonged in design magazines, with collections of tiny items on glass shelves behind small glass doors. She had taste, if you say it and see it a certain way. She threw fancy parties where women used cigarette holders and men smoked cigars. She often spoke of her “staff”. It made mom laugh and laugh when I asked her to “tell me more about grandma’s stick”. I was little, I had no idea someone I was related to could have enough money to hire other people to do little everyday things.

Then she lost control over her body progressively. Hospital and hospice visits I do remember. And now that I think of it? That fucking cat was there, in every room where they put her. During that time, mom did her best to be a good daughter. I know because of all those visits, and also later I heard her say so. Late evenings in her trailer when she thought I was asleep, she’d cry and whisper – only her words got louder and louder. She’d talk to grandma. Tell her she’d tried to be a good girl, to do as mama asked. She’d rock in her chair, hard and regular. Hugging the porcelain cat, stroking it like a real pet, talking to it as if it was her mother.

She never caught me spying and I never mentioned this. I wasn’t even supposed to know the cat’s story but I overheard one of my dad’s sisters tell the other that my grandma had left her fortune to some convent no one had ever heard her mention and to her only daughter, only a porcelain cat with a scathing letter of reproach. My grandma hated my mother’s choice of my father so much. Us kids too, I think.

My mom kept the cat on her TV. In a small trailer, that was pretty central and there was nowhere in the common area where you could sit or stand without those green eyes staring. I always made faces at it, in defiance. But it always scared me too. It was tacky, yet it reminded me so much of grandma it felt like she was staring through the porcelain eyes.

So now what. I’m just fourteen, my mom’s dead, and I’ve inherited the family curse, this porcelain cat. I feel like it’s some voodoo amulet, some Egyptian curse, heavy shit. Some inescapable doom, like in movies, like if I throw it down a well and hear it shatter I’ll run home to find it whole on my dresser. What, am I supposed to live under its stare the rest of my life, until I leave it in turn to my daughter like a big dump of guilt? Fat chance of that. Are both my grandma and mother looking at me, judging me through those damn eyes now?

Meanwhile, mom’s gone. There won’t be anyone to pay my phone bill this month, and my service’ll get cut. Shit. I wonder if I can get Toby to pay for it for a couple blow jobs a month? Or if not, James. Or Scott. It shouldn’t be too hard to make a deal. As for the cat, I could try to throw it out. But it really is the only thing I have left from mom. For now I think I’ll just turn it around so it faces the wall.